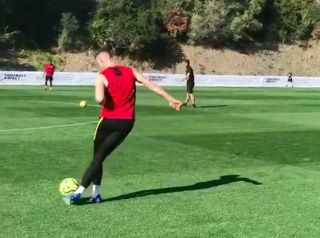 Manchester United midfielder Scott McTominay is enjoying himself in the winter training camp as he targets an imminent return to first-team action.

Ole Gunnar Solskjaer’s squad has flown out to Marbella, Spain for some warm weather training in the Premier League’s maiden mid-season break.

McTominay has not featured for the Reds since sustaining knee ligament damage in the Boxing Day victory over Newcastle.

His loss has meant Solskjaer’s options have been extremely limited, but his return, coupled with the addition of Bruno Fernandes, gives United’s midfield a completely different outlook.

We hope the Scottish international is back to full fitness and available to face Chelsea at Stamford Bridge next Monday.

Meanwhile, McTominay produced some ridiculous skill in training on Monday, as he flicked the ball up brilliantly before firing a pin-point pass to his United teammate.

See the video below, courtesy of Man Utd’s official twitter: