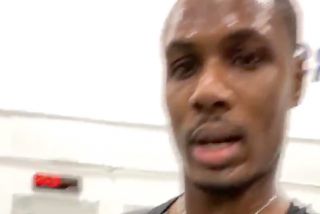 Odion Ighalo’s dream came through last week when he was announced as a Manchester United player after joining on a six-month loan deal from Chinese Super Club Shanghai Shenhua.

It’s been three years since he’s kicked a ball in the Premier League, so the 30-year-old has a lot of work to do to get back to his best standard of fitness.

Due to border restrictions and the coronavirus, Ole Gunnar Solskjaer decided to leave Ighalo in Manchester while his new team-mates travelled to Spain for their winter training camp, but the ex-Watford striker is still working hard to prove himself as a United player.

The winter break ends this weekend — with United facing a trip to Chelsea on Monday night.

Ighalo is still in Manchester and has uploaded a video from his latest workout, as seen below:

He’s certainly worked up a sweat!

But his fitness will be tested once the full squad returns from Marbella.

Solskjaer will then decide whether to start Ighalo or name him on the bench against Chelsea.