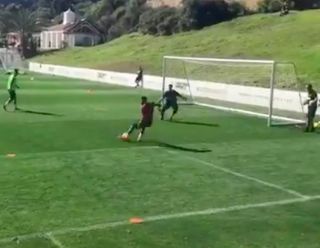 Spirits are high in the Manchester United squad during their mid-season break.

Ole Gunnar Solskjaer has taken advantage of the Premier League’s maiden winter break; his players have flown out to Marbella for some warm weather training.

We’ve seen some encouraging signs from the camp, with Scott McTominay and Axel Tuanzebe both working their way back to full fitness.

It looks as if McTominay is nearing a return to first-team action and could make an appearance against Chelsea at Stamford Bridge on Monday.

United’s social media accounts have been keeping us up to date with everything going on in Spain, and have posted a clip of Fred’s winner in a training game.

The Brazilian, who won United’s January player of the month, finished tidily into the far corner prompting jubilant celebrations from teammates.

There is clearly a competitive edge to these mini-games and it’s great to see players in such high spirits going into a critical stage of the season.

🙌 Jubilant celebrations as @Fred08Oficial seals the W during day 2️⃣ of our warm-weather training session!#MUFC pic.twitter.com/UtXytMBtCZ