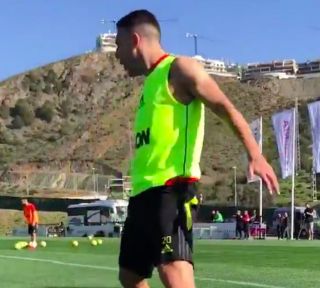 Manchester United players appear to be in buoyant mood during their mid-season training camp in Spain.

Ole Gunnar Solskjaer’s squad have flown out to Marbella for some warm weather training ahead of next Monday’s clash against Chelsea at Stamford Bridge.

Scott McTominay and Axel Tuanzebe have travelled as they near their return to full fitness, but new signing Odion Ighalo has been left back home in Manchester over immigration fears.

United’s social media has been providing some great content of the players enjoying themselves during training, and this video of Diogo Dalot is the latest brilliant clip.

Dalot re-enacted Cristiano Ronaldo’s famous celebration after presumingly scoring in the training game. Juan Mata and Anthony Martial both greeted the right-back after the celebration.

Unsurprisingly, the 20-year-old has previously named United great and fellow countryman Ronaldo as his footballing idol.

“Ronaldo, for me, was the main one,” he told United’s official website in May.

“For me, he was the main inspiration to start playing football. Not because I want to be like him, I want to take my own path, but to get to know him and see how he works is unbelievable.”

See the video below, courtesy of Man Utd’s official twitter: