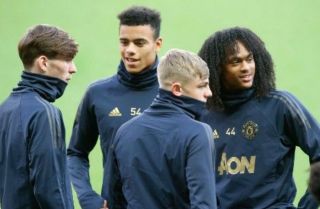 Tahith Chong is reportedly close to agreeing contract terms with Inter Milan ahead of a free transfer in the summer.

The young Dutch winger is nearing the end of his contract at Old Trafford, permitting him to talk with foreign clubs ahead of next season.

It is claimed by FCInterNews.it that Inter and Chong are in talks over his wages as the Man Utd youngster edges towards an exit. We can’t say how reliable this source is, but the report was at least picked up by Caught Offside, so we’ve shining some light on it with the belief Chong should give it another season at United even if that means going out on loan.

The latest from the Mail claims Inter are battling it out with Juventus for Chong’s signature, again stating that he has no intention of signing new terms with the Red Devils.

The 20-year-old could join former United players Romelu Lukaku and Ashley Young at the San Siro next season. It remains to be seen whether they will turn their loan deal with Alexis Sanchez into a permanent move. While Solskjaer went on record saying the Chile star has a future at Old Trafford we’re certainly not buying it.

With Chong failing to impress this season, United aren’t at risk of losing a player they feel is ready for the first-team just yet, and Ole Gunnar Solskjaer has shown he believes that this season, only really calling on the kid in cup matches.

FCInterNews say Chong decided not to sign a new deal with United and we can only assume that is because of a lack of first-team opportunities in recent times.

When Chong sees Mason Greenwood and Brandon Williams flourish in the first-team, it probably frustrates him as he hasn’t kicked the ground running with the seniors quite like them, but he needs to be patient and focus on improving.

Chong is full of potential but raw… very raw.