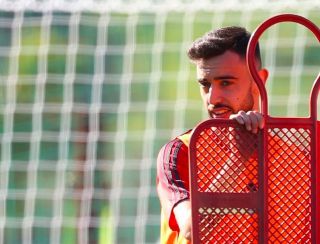 Ole Gunnar Solskjaer has heaped praise on Bruno Fernandes with the Portugal midfielder making an immediate impact at Manchester United.

Fernandes made his debut at Old Trafford in the drab 0-0 draw against Wolves before the maiden winter break. Without providing the decisive moment in that game, Fernandes showed glimpses of what is yet to come.

The 25-year-old has travelled with the rest of Solskjaer’s squad to Marbella as they take advantage of the mid-season break with a warm weather training camp.

United’s players appear to be having a great time in southern Spain as they prepare for a big test against Chelsea at Stamford Bridge next week.

And Solskjaer has lauded Fernandes for his quality but also his dedication in training sessions.

“Well, overall, he is a very, very good footballer and his brain is obviously quicker than many others,” the United boss told the club’s official website.

It will be interesting to see where Solskjaer will deploy Fernandes, particularly with Scott McTominay closing on a return to action.

McTominay was United’s best midfielder this season before sustaining a knee ligament injury on Boxing Day. The Scottish international’s return could see him partner Fred in a midfield double pivot, with Fernandes operating furthest forward in attacking midfield.

We feel this would provide a platform that gives United an attacking threat, with Fernandes’ quality most effectively utilised in attacking areas.

Feeling good and getting stronger here in Marbella with the rest of the lads! 🔴💪🏻⚫ #MUFC @ManUtd pic.twitter.com/eyQuai0K2d