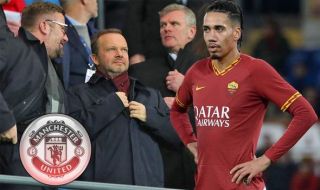 Manchester United centre-back Chris Smalling is keen on moving to AS Roma permanently, according to the Manchester Evening News.

Smalling is currently enjoying a season-long loan spell with the Serie A outfit and has earned praise from Italian football critics.

Given Ole Gunnar Solskjaer was happy to send the player on loan this season following the arrival of Harry Maguire, you’d think United will have an asking price for Smalling this summer, so it will come down to whether Roma can afford to buy him.

His valuation will have risen over the past year and United are in a strong negotiation position because we know Smalling has impressed during his time in Italy, and that could prompt other Serie clubs to join the race for his signature.

But with Smalling said to be “keen” on a permanent switch to Roma he could make a decision based on loyalty.

We would like to see United honour Smalling’s wishes because even if he returns we will still be lacking in defensive quality as Maguire needs a partner with top class pedigree.

More and more English players are showing a willingness to play abroad which can’t be a bad thing for football.