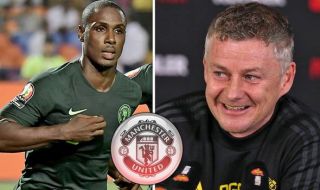 Odion Ighalo will go straight into the Manchester United squad for Monday’s Premier League clash away to Chelsea, despite missing the warm-weather training camp in Spain due to travel restriction concerns after arriving from China where the coronavirus is spreading.

The 30-year-old completed a shock loan switch from Chinese side Shanghai Shenhua on deadline day and has stayed in Manchester working on his fitness this past week.

Solskjaer said over the weekend that the club had left Ighalo in the UK as they were unsure whether he would be allowed back into the country, having recently arrived from China.

The manager now confirms that the striker will go straight into the squad that faces Chelsea after the winter break.

“He is going to travel with us,” said Solskjaer, as per GOAL. “We will just see his fitness work this week and I think we will get him sharp.

“We want to integrate him as quickly as we can because, of course, he is desperate to play for us.”

It’s been three years since Ighalo played at Premier League level, so he will need time to adapt his game again.

The Chinese Super League doesn’t compare and Ighalo knows all about the standards in England’s top-flight.

Away from the field, United have issued their intentions to bring safe standing to Old Trafford.

The club is in favour of the idea of rail seating and discussed the matter at a recent fans’ forum.