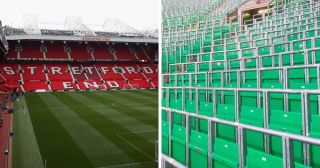 The club wants to install rail seating for up to 1,5000 supporters in the North East Quadrant.

That’s music to our ears as it means Man Utd are open to safe standing.

Sky Sports claims the Premier League are in favour of rail seating in parts of the ground, so these are all steps in the right direction.

Minutes from the United fans’ forum on January 31 read: “A formal proposal was made to the local Safety Advisory Group in December 2019 to request a trial in a small section of the stadium (up to 1,500 seats in the North East Quadrant).

“Our belief is that the introduction of rail seating will enhance spectator safety in areas of the stadium where — as with other clubs — we have seen examples of persistent standing.

“The SAG committee is reviewing the request. This is not an automatic approval process.

“We will discuss the proposal in detail with the relevant authorities and will work through their compliance and review processes.”

That means the club will now wait for a response from the Safety Advisory Group on whether they will get the go-ahead.

It would be great if a trial could take place before the end of the season.

Also worth noting is that United have confirmed their decision to cut away allocation to 3,000 for both legs of last month’s Carabao Cup semi-final against Man City was because they have been “unfairly” treated by their neighbours, as per The Sun.

United weren’t happy with City’s decision to reduce their allocation at the Etihad.

For all the stick the club gets, it’s good to see they are working with fans towards building a happier atmosphere at Old Trafford — and it will only get happier if the results on the pitch reflect that.

Collaborating with fans’ group The Red Army is paying dividends.