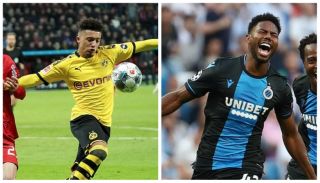 Manchester United have reportedly been given a transfer boost in their rumoured pursuit of Borussia Dortmund winger Jadon Sancho.

The England international is one of the most exciting youngsters in world football after developing his game in the Bundesliga, and it makes sense that Dortmund prepare for life without him.

Speculation has been rife for some time now that Sancho could leave BVB. It didn’t help that his relations with the club took a negative turn in October after he reported back late from international duty. The former Man City youth player was given an enormous fine (£86,000 via the Mail).

Moreover, BVB are known for cashing in on their star players when bigger clubs come calling, as we’ve seen in the past with Shinji Kagawa although that didn’t quite go to plan.

According to The Sun, Man Utd and Chelsea will battle it out for Sancho in the summer, and it now looks like his present club are chasing a replacement. The Bundesliga outfit may be a selling club but they have an effective model in place that works — buy cheap, sell big.

HLN claim BVB are eyeing up a move for Emmanuel Dennis, with the report suggesting he could be seen as the answer to Sancho’s likely departure.

Dennis has attracted heavy interest from around Europe the season, having scored five goals in 20 appearances so far, including twice in the Champions League against Real Madrid.

Given Club Brugge are our next opponents in the Europa League, later this month, we’ll get to see what Dennis is like first hand.

However, it remains to be seen if Sancho is definitely on the way to the Premier League.

If it comes down to United or Chelsea, don’t be surprised if he picks the team that finishes fourth in the Premier League. Sancho wants to play Champions League and you can’t blame him.

We’re sure Liverpool will sniff around as long as they can afford to.