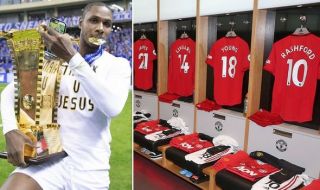 Odion Ighalo is unlikely to start against Chelsea next week.

Manchester United’s loan signing from Shanghai Shenhua faces a battle to convince Ole Gunnar Solskjaer of his fitness ahead of next Monday’s trip to Stamford Bridge,

Ighalo has stayed in Manchester instead of travelling with the team to their warm-weather training camp in Spain. The 30-year-old will be using this time to work on his fitness as he prepares to make his eagerly awaited Man Utd debut.

Given Ighalo’s lack of action in recent weeks — not playing a competitive match since the beginning of December — it would be a surprise to see him start against Frank Lampard’s side.

According to the Evening Standard, however, Ighalo will have to ‘produce wonders’ in training if he is to stand any chance of making the line-up versus Chelsea.

Speaking before the squad jetted off to Spain on Saturday, Solskjaer said he didn’t want to risk taking the former Watford striker out of the country after he just arrived from China.

“Odion will stay in Manchester, because he arrived from China in the last 14 days,” he said, as per The Express.

“Because of the situation in China, we’re not sure if he’d be allowed back into England if he leaves the country again, so he’s staying here working with a personal coach, individual programme and his family then can settle in England as well, That’s a plus.

“Of course he might have liked to have come with the players and got to know them, but the risk, we don’t want to take that.”

The risk Solskjaer talks about refers to potential changes to border restrictions on people arriving in the UK from China amid the coronavirus outbreak.

A place on the bench against Chelsea appears the more likely route for Ighalo.