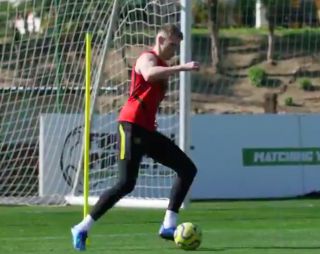 Scott McTominay is stepping up his recovery as he targets his return to Manchester United first-team action.

The midfielder has not featured for the Reds since sustaining knee ligament damage in the 4-1 victory over Newcastle on Boxing day.

But he has travelled with the rest of Ole Gunnar Solskjaer’s squad for the warm weather training camp in Spain in the maiden Premier League winter break.

McTominay looked to be moving well in these clips and we hope he will be available for next Monday’s trip to face Chelsea at Stamford Bridge.

Before his injury, McTominay became a crucial component in Solskjaer’s midfield and the manager’s options have been incredibly limited in his absence.

Meanwhile, central defender Axel Tuanzebe is also working to get back to full fitness after picking up an injury in December’s Carabao Cup game against Colchester.

See the pair working on some drills below (footage courtesy of Man Utd’s official twitter page).

Axel Tuanzebe and @McTominay10 step up their recovery from injury.#MUFC pic.twitter.com/KpgWYd5tWM