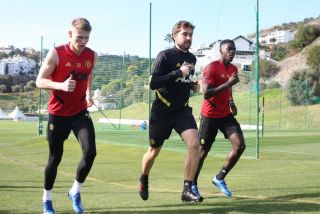 Scott McTominay could return from injury ahead of schedule for Manchester United, according to James Robson of the Standard.

The midfielder suffered knee ligament damage in a clash against Newcastle United back in December.

But it sounds like his recovery has done better than expected, with Ole Gunnar Solskjaer deciding to take him in his travelling squad for United’s winter training camp in Spain, while Paul Pogba stays behind in Carrington working on his recovery from injury.

McTominay was supposed to stay behind with the Frenchman until Solskjaer changed his mind after seeing the Scotland international’s response to treatment.

Solskjaer told MUTV, as quoted by the Standard: “Scotty has done better in this recovery than we thought, so we will take him with us.

“Hopefully he can join in the training sessions and Axel (Tuanzebe) as well, he’ll join in, so that’s two positives and it’s a good chance for them to use this time with the players.”

There is still no date set for McTominay’s return, but this is positive news and it shouldn’t be that long of a wait granted there’s no setbacks.

We could really do without those and having a full squad at some stage between now and the end of the season. It seems a big ask because we’re always a fixture away from another injury, at the rate we’re going this season especially.

McTominay had a growing influence on the team before his injury. We need him back as soon as possible.