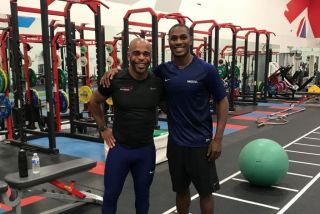 According to the Telegraph, Manchester United loanee Odion Ighalo has been completing double training sessions alongside Great Britain’s Olympic Taekwondo team in a bid to reach fitness quicker amid his arrival at Old Trafford.

Ighalo’s dedication to get fit is impressive and it certainly bodes well to have a hard-working striker for the remainder of the season.

Good week so far with @ighalojude as we prepare him for his move to @manchesterunited working behind the scenes a fantastic Athlete but the hard work begins watch this space for training sessions and updates to follow remember hard work works . #gobackready #athlete @nikefootball #fitness @gbtaekwondo #gobackready #guidance #support #conditioning #extrawork #preparation #fitnessforfootball @nikerunning #livingthedream #thankgod

The Nigerian forward has experienced life in the Premier League and will be keen to get back on the pitch, this time in a United shirt.

It’s been three years since he’s played top-flight football in England, so Ighalo is putting himself through his paces in attempt to hit the ground running after the winter break.

With Marcus Rashford ruled out for the long-term, Ole Gunnar Solskjaer had to sign an emergency striker in January, and we could have done a lot worse than Ighalo.