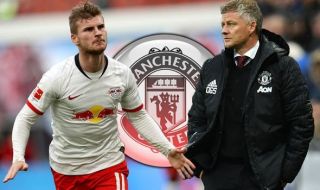 With Manchester United light for options up front and having to make an emergency loan signing on deadline day, those involved with scouting at the club should be on the lookout for the best available goalscorer this summer.

Marcus Rashford is out with a long-term back injury and it remains to be seen if Odion Ighalo can score enough goals to fill his void.

Up until now, Anthony Martial has been the man tasked with player in the centre-forward role, and we reckon a stint on the left awaits the Frenchman, with new boy Ighalo trusted in a more central role.

PSG’s Edinson Cavani was linked with a move to United in January, but he remained in Paris after a transfer to Atletico Madrid fell through, as per Bleacher Report.

Ex-United striker Robin van Persie thinks the Red Devils should target the Uruguayan but since Ole Gunnar Solskjaer has until the summer to make up his mind, we should be looking at a more long-term option who is capable of scoring goals like prime Cavani.

The 30-year-old would be a good stop-gap option for United, though he’d likely demand crazy wages which would be better spent on someone younger.

And, as already mentioned, Ighalo is only on loan at United until the end of the season.

We take a look at three possible striker options for Solskjaer’s side.

ESPN reported earlier this week that Solskjaer wants to add at least one striker to his squad during the summer.

Inter Milan striker Martinez was named as a top target for United.

The same report claims Barcelona are favourites to land the 22-year-old.

The Times then reported that United had opted against signing the Argentine after being told they would have to trigger his release clause, believed to be worth around £94m.

He has 16 goals and four assists in 27 outings this season.

The former Celtic and Fulham striker ha been in fine form this term, netting 18 and assisting six in 34 appearances for the Ligue 1 side.

The Mirror recently claimed that Dembele could be allowed to leave Lyon in the summer which opens a door for United to enquire. He’d be cheaper than Martinez, with the report stating his value is in excess of £60m.

Like Dombele, Maxi Gomez is a striker United are keeping tabs on.

Spanish reports claimed last month that United have asked scouts to keep track of the Valencia striker, and we are led to believe they were present for Los Che’s 2-0 win over Barcelona, in which Gomez scored twice.

Previously a target for West Ham — before he left Celta Vigo for Valencia last summer — this year could see the Uruguayan join the Premier League.

Timo Werner has become a name that is linked with every top Premier League club in need of a goalscorer, and we aren’t alone in that category.

Chelsea and Tottenham both had a look at strikers in the January transfer market and ended up with none.

In the summer after the European Championships, Werner is likely to reassess his future at the Bundesliga side.

This is the kind of striker you don’t want United to miss out on — like how Erling Haaland joined Borussia Dortmund last month.

The Express has linked Werner with a move to United and Liverpool.