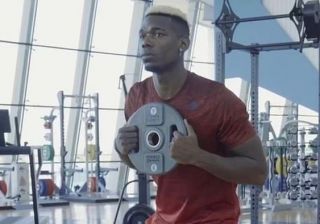 Paul Pogba has posted a fitness update ahead of his long-awaited return from injury.

The French midfielder captioned the post ‘Slowly but surely’ as he works his way back to full fitness having not featured for Manchester United since the Boxing Day victory over Newcastle.

He has since had an operation on his ankle and is seen working on several exercises in a Dubai gym.

Pogba has made just six appearances for Ole Gunnar Solskjaer’s side this campaign and his season has dwindled into something of a non-event.

Despite a positive update on his fitness, it remains unclear when Pogba will actually return to first-team action as the club confirmed that he will not be part of the squad that travels to Spain for a training camp.

Solskjaer is taking advantage of the first ever mid-season Premier League break and the squad will fly out for warm weather training on Saturday.

Scott McTominay and Axel Tuanzebe are amongst those travelling, but Odion Ighalo will stay in Manchester due to immigration fears.