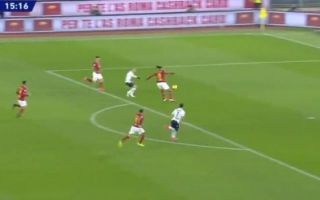 Chris Smalling has been receiving lots of praise for his performances in Italy this season and there was even some clamour earlier on in the season for him to come back to Old Trafford and become a regular in the team again.

He started really well for Roma, defensively sound and contributing on the goal front, but mistakes have started to creep into his game and he’s looking like the player we all saw during his time at centre-back for United.

Roma’s chances of qualifying for next season’s Champions League suffered another blow as they suffered a 3-2 home defeat against Bologna — a result which extended their winless streak to three Serie A games.

“At this moment, we are too anxious, so I must consider what I can do to change this situation,” Roma boss Fonseca told Sky Sport Italia, as translated by Football Italia.

“We must work to change this. It’s not overly dramatic, it might all seem negative right now, but we just need courage.”

Riccardo Orsolini took advantage of an error by Smalling to grab a 16th-minute opener for Bologna at the Stadio Olmpico, as seen in the video below via Premier Sports:

🤦‍♂ A moment to forget for Chris Smalling!

⚽ The Roma defender decided to leave Barrow's cross, and Orsolini swept it home to give Bologna the lead pic.twitter.com/DxkDWrYWpD

It was a pretty awful mistake from the United loanee.

Smalling appeared to think his goalkeeper or partnering defender would clear the ball, but you can see he was in between two minds before retracting his decision to make a clearance.

He should have sent it over the stands!