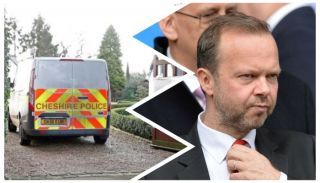 Manchester United have accused The Sun newspaper of receiving advanced notice of an intended attack on the house of executive vice-chairman Ed Woodward, while the tabloid says it vigorously defends its right to report.

The club has filed a complaint to the press regulator regarding The Sun’s coverage of the attack on 28 January.

The newspaper confirmed a reporter attended “following a tip-off that there was to be a protest” and they garnered the most sympathetic coverage of Woodward in years. But it added it was not made aware of what was to take place or encouraged any criminal activity.

In a statement, Manchester United said (via BBC Sport): “The Club believes that the Sun newspaper had received advance notice of the intended attack, which included criminal damage and intent to intimidate, and that the journalist was present as it happened.

“The quality of the images accompanying the story indicate that a photographer was also present.

“Not only did the journalist fail to discharge the basic duty of a responsible member of society to report an impending crime and avert potential danger and criminal damage, his presence both encouraged and rewarded the perpetrators.”

Breaking: Man Utd makes a formal complaint to the Independent Press Standards Organisation over The Sun’s coverage of the attack on the house of Exec Vice-Chairman Ed Woodward.
Utd says it believes the newspaper “had received advance notice of the intended attack” pic.twitter.com/PqIUBBUSx2

In response, The Sun said it condemns the attack on Woodward’s Cheshire home and that it was “happy to cooperate fully with any police inquiry,” as seen in the statement below:

Breaking: The Sun admits a reporter attended attack on Man Utd exec Vice-Chair Ed Woodward’s home after a tip-off & “vigorously defends its right to report.”
“At no time was our reporter made aware of what was to take place nor incited it or encouraged any criminal activity” pic.twitter.com/i3XyNLn2t9

Thanks to BBC reporter Dan Roan for sharing both statements on Twitter.

We called The Sun’s report out as suspicious a day after it went live, mainly because it was clear from the photo quality that a photographer was involved.

The Sun had a photographer at the scene, and those involved stood there no problem having their photo taken. What sorcery is this? https://t.co/1xuSKV3xJS

This is bound to raise more questions over the alleged attack and hopefully the journalist who had the information is named.

The journalist named on the byline of the exclusive is Richard Moriarty.

We can’t help but wonder what Neil Ashton must be thinking after leaving The Sun to work on PR matters at United. Whoever kept the information after being tipped off is surely one of his ex-colleagues?