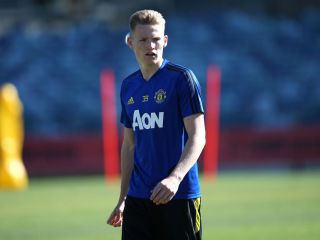 Scott McTominay and Axel Tuanzebe will join teammates for the mid-season training camp in Spain.

Ole Gunnar Solskjaer’s squad fly out for some warm weather training on Saturday, but will be without Odion Ighalo who will stay in Manchester due to immigration fears.

McTominay has not played for the Reds after sustaining knee ligament damage in the Boxing Day victory over Newcastle.

Tuanzebe, meanwhile, has not featured since coming off injured in the Carabao Cup victory over Colchester in December.

However, it’s encouraging news to see the pair travelling with the squad as they continue their recovery process.

Tuanzebe was establishing himself as a useful first-team squad member before his unfortunate injury. The 22-year-old was Solskjaer’s third choice centre-back behind Victor Lindelof and Harry Maguire, but may now have to work his way back into the fold.

McTominay was a key part of United’s midfield and options have been limited in his lengthy absence. Solskjaer has consistently chosen Fred and Nemanja Matic in the midfield pivot, but we hope McTominay can return to action soon to provide some much needed competition and depth in the middle of the park.

When McTominay does eventually return, he will be boosted by the addition of Bruno Fernandes, who provides another dimension to United’s attack.