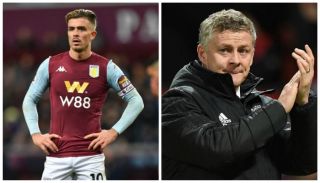 Grealish is widely expected to leave his boyhood club this summer, with several top Premier League clubs reportedly interested in his signature.

Villa are currently embroiled in a relegation battle and Grealish will be crucial to their hopes of survival this season.

The 24-year-old has netted seven times and has five assists this season in the Premier League, an impressive record for a struggling club.

His most notable goal for United fans came at Old Trafford where he scored a stunning curled opener in a 2-2 draw.

While Mills does not question Grealish’s outstanding ability, he has concerns over his discipline.

“Because Villa have been poor and he is trying to carry them and keep them up and do everything he possibly can, that’s the only question, does he have that discipline? He probably does, but someone’s going to have to take a chance on him,” Mills told Talksport, as quoted by Manchester Evening News.

“Jack Grealish has got all the ability in the world. He’s someone that carries the ball, runs at people and makes things happen.

“The only downside at the moment is because he’s in a struggling side, because he loves that club [Villa] so much, he’s captain, he’s almost trying to do too much at times. Because he has to play that role for Villa, maybe one or two clubs are thinking ‘is he disciplined enough to play a certain role within the structure of my team’?’

Grealish is afforded a free role by Dean Smith in the Villa team and while this may not be the case in his next club, he would be an excellent asset for many of the league’s top sides.

According to Manchester Evening News, Ole Gunnar Solskjaer holds a genuine interest in Grealish and he has been identified as a  summer target.