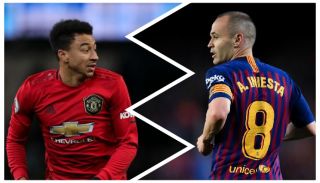 The 27-year-old has been struggling for form at Old Trafford this season, failing to score a goal in the Premier League since December 2018.

That’s not good enough but it doesn’t warrant some of the abuse Lingard has received online since his form nosedived.

Meulensteen still compares Lingard’s qualities to those of World Cup winner Iniesta. A player who has come to embody Barcelona.

‘Jesse had various loan clubs and then came back,’ Meulensteen told The Michael Anthony Show.

‘And I think Louis van Gaal was the manager at the time and Louis was very big on bringing young players through and Jesse got the chance to suddenly play in the first team and so did [Marcus] Rashford.

‘That’s the luck that you need and certain managers can see it.

‘Jesse always had attributes in his game as Iniesta had for Barcelona.’

Yesterday’s show with Rene Meulensteen below. Great insight into the glory years of United in the 00s and 10s.

Also discuss what the club could have done differently over the past 6 years.

Having joined Barcelona aged 12 Iniesta made his way through La Maria academy, secured a place in the first time and went on to become a constant during the course of one of the finest eras in the club’s history.

The same story can be told about Iniesta at international level. He was the vocal point of Spain’s best teams.

Meulensteen, clearly a fan of Lingard, believes the England international will return to his best but must sort out the ‘dent’ in his game.

‘Jesse, in my opinion — and I think he knows it himself, he’s a great kid — he’s the sort of player that’s so difficult for opposition teams to mark,’ he added.

‘I think it’s more a confidence thing, you need to recognise as staff and coaches and say “OK, when did you have the best games? When did you score the most goals? And why isn’t it happening now?”

‘Somewhere down that line there’s a dent and you need to find that and what you can do to make sure the focus goes back.’

With the arrival of Fernandes, it seems unlikely that Lingard will be a starter at United again which shows that we’ve strengthened an area in the team.

Will Lingard be happy as a squad player in the future? At 27, he will be thinking about staying in Gareth Southgate’s plans too.