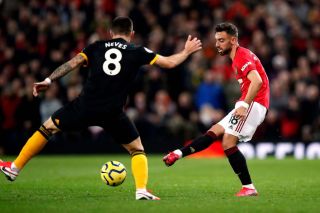 Dimitar Berbatov was impressed with Bruno Fernandes on his Manchester United debut.

Fernandes was arguably United’s most dangerous player against Wolves on Saturday in what was a dull affair.

While not setting Old Trafford alight, the Portugal midfielder showed glimpses of what he can offer Ole Gunnar Solskjaer in the coming seasons.

The 25-year-old had three shots on target in the match and was always looking for the incisive pass when in possession.

Former United striker Berbatov believes Fernandes has all the attributes to be a success at United, but may need to work on the physical side of his game to adapt to the Premier League.

“He will need a few games to get used to the rhythm of the team but the Portuguese midfielder showed that he’s an intelligent player, with an eye for a killer pass and powerful shot,” Berbatov said in his Betfair blog.

“As he grows into his role, I can see Fernandes controlling games. But there were a couple of incidents that suggested he needs to work on the physical side of his game. The Premier League is the most physical league, much tougher than the Portuguese league and faster too.”

“The signs are good for Fernandes and I am looking forward to United’s next match, following the winter break, to see how he slots into United’s system and if he can add creativity.”

In Fernandes, Solskjaer has a player that he can build his United team around. Paul Pogba is widely expected to leave this summer and the playmaker is the future of United’s midfield, alongside Scott McTominay.

He can operate in a number of roles, but we feel Fernandes will initially most effective in behind the striker where he can influence the game most with United lacking in quality in attacking areas.