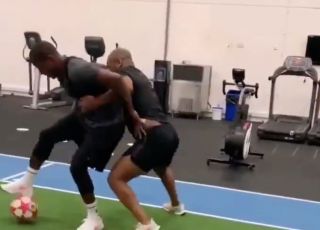 Odion Ighalo has arrived at Manchester United and is already training.

Since it was off-season in China, the former Watford striker will be doing plenty of strength and conditioning training to retain match fitness at Premier League level.

Ole Gunnar Solskjaer moved for Ighalo in the transfer market not just looking for cover to deal with Marcus Rashford’s injury, but to give his team another route to scoring goals.

Anthony Martial is a good player on his day but he doesn’t do it on a consistent basis. Nor does he hold up play or battle defenders for the ball inside the box.

The video below shows Ighalo preparing for life as a United centre-forward. Holding up the ball with a pretty strong man on his back.

He can also be seen on the bike.