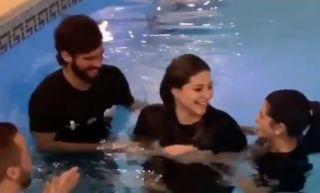 Liverpool goalkeeper Alisson Becker has been involved in his second baptism of the year.

I never thought I’d be writing that sentence about a footballer before, but it’s nice when something new and different pops up in the news.

Actions like this show how serious some footballers and their families take religion. A baptism is a massive moment in any practising Christian’s life, and it shows the trust international teammates have in their keeper.

Take a look at the photo below:

Fred is currently enjoying a better period on the pitch after initially struggling to adapt to the English game. He looks like he could be a good squad player in years to come as United’s midfield still lacks quality when he’s involved.

It will be interesting to see what difference new signing Bruno Fernandes will make to the other midfielders at the club.

With Scott McTominay and Paul Pogba out injured, Fred has had to step up his game.