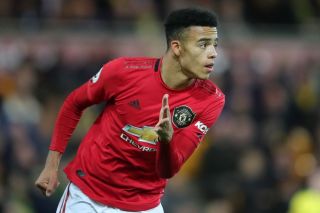 Manchester United legend Rio Ferdinand has heaped praise on young forward Mason Greenwood, but has warned Ole Gunnar Solskjaer that he has to be nurtured correctly to avoid burnout.

Greenwood has netted ten times in all competitions this season, after breaking into Solskjaer’s first-team towards the end of last season.

The 18-year-old is recognised as one of the most promising talents to graduate from the academy in decades, and has operated in numerous attacking positions in this campaign.

But Ferdinand has warned United that another mercurial talent Michael Owen burned out too quickly after playing too many games resulted in a late career plagued by injuries.

“The kid is a fantastic goalscorer,” Ferdinand told FourFourTwo.

“All through the youth levels as a kid, he’s always found it easy scoring goals. He plays off both feet – he’s a fantastic talent, but he needs to be nurtured correctly. You can’t expect him to come in and play every game just because there’s an injury to Marcus and then put it all on his shoulders.

“A good yardstick is to look at someone like Michael Owen. He came through as a ‘boy wonder’, huge expectations [on him] and he played far too many games from a young age.

“I think that was a big factor in him having big injuries later on in his career, slowing him down. That’s something to look at, to make sure we don’t have the same mistake with Mason – nurture him the right way. It [coping with the pressure] is difficult if he’s got no one around him with the experience to guide him.”

In truth, Solskjaer has handled Greenwood exceptionally since he has joined the first-team setup.

The United boss has already named Greenwood as the most natural finisher he has at the club, but has refused to overplay him despite being bereft of attacking options.

Greenwood starts sparingly in the Premier League and is mainly utilised in the other competitions.

He has made eighteen substitute appearances in the league this season, and has scored four Premier League goals in all.

Solskjaer will know Greenwood could be crucial to United’s Europa League charge without their star man Marcus Rashford.