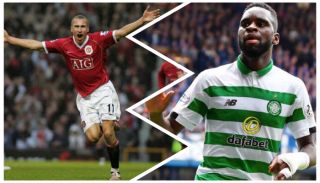 Michael Stewart is an outspoken pundit nowadays but his career as a footballer began at Manchester United.

While working at the Motherwell v Celtic game, he said that Celtic’s French striker Odsonne Edouard would walk into the current Man Utd team.

“Manchester United don’t have a striker, Odsonne Edouard would walk into that team,” Stewart said alongside ex-United star Gordon Strachan.

Challenged by BT Sport anchorman Darrell Currie, Stewart was asked if the Celtic striker is better than the likes of Anthony Martial and Mason Greenwood, and the pundit was adamant in his response: “Yeah, I think so,” as reported by the Glasgow Times.

The Saints have benefited from buying players in the Scottish league in the past, such as Fraser Forster, Victor Wanyama and Virgil van Dijk.

Strachan is of the view that — if Celtic sell Edouard for big money — he is good enough to by-pass a move to a club like Southampton, and can aim higher towards a bigger club. The former Scotland manager likened the striker, who has 24 goals this season, to Arsenal legend Dennis Bergkamp.

“He reminds me of Dennis Bergkamp. He can do what Bergkamp could do, perhaps at a younger age.

“You look at the players who have left Celtic. Virgil van Dijk, Victor Wanyama, they’ve gone to Southampton. No disrespect to Southampton but Edouard can go to the top, a top team, right now.”

And Chris Sutton went on to compare Edouard to Celtic legend and former United striker Henrik Larsson, one of the greats of the game.

“Celtic brilliant tonight… some of the football tonight breathtaking. Edouard the closest thing to Larsson I’ve seen in a Celtic jersey… so unselfish, a team player, deadly finisher,” Sutton said.

For a @CelticFC striker, praise does not come much bigger than this ☘️ pic.twitter.com/vXc3HoquZQ

Are we talking about a new target for United?

Ole Gunnar Solskjaer needs to send some scouts to Celtic Park to check on this man.