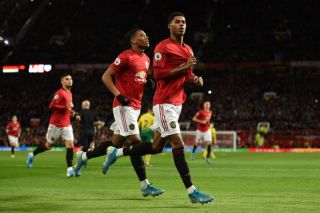 Despite being inconsistent all season, Man Utd have gotten the better of Norwich home and away in the Premier League.

The 20-year-old right-back picked Rashford over the likes of Sadio Mane, Mohamed Salah and Son Heung-min as the toughest opponent he has faced in the top-flight.

That’s a big statement and one Rashy will be delighted to hear about.

Aarons, who only became a Premier League player this season, claimed that the England international is ‘on another level pace wise’ and without question is the toughest to play against.

It would be interesting to hear who other PL defenders think is the toughest opponent they’ve faced, and we think Rashford would be a common nomination.

Rashford scored three goals against Norwich this term — one in the 3-1 win, two in the 4-0 win.

“I’m definitely testing myself against the best players,” Aarons told Premier League Productions, as cited by Manchester Evening News. “Rashford was excellent in the game when we played against them, definitely the toughest I have come up against so far. I think he is on another level pace wise.”

Rashford faces a long spell on the sidelines with a serious back injury.

The summer departures of Alexis Sanchez and Romelu Lukaku came back to haunt Solskjaer, though it’s not his fault an adequate replacement wasn’t brought in before the 2019/20 campaign started.

I’m afraid that is just another example of the Glazers not caring about on-pitch affairs. As we’ve known since the 2005 takeover, the American family are only in it for money.