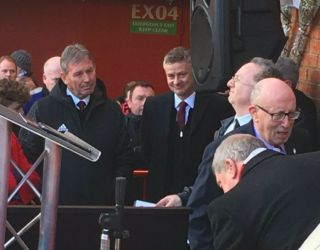 Manchester United staff, former players and fans have gathered at Old Trafford for the annual memorial of the darkest day in the club’s history.

On this day 62 years ago, 23 people lost their lives in an aeroplane crash, including eight of Matt Busby’s Babes.

READ MORE: Paul Pogba being left out of Spain training camp another indication of impending exit

United had been to Yugoslavia to play a European Cup tie against Red Star Belgrade, and stopped in Munich to refuel.

There were then two aborted takeoffs and by the time the third was attempted, the runway was covered in snow and the plane crashed through a fence and into a house.

As is tradition, there was a service at Old Trafford to remember those that tragically lost their lives that day.

They will never be forgotten.