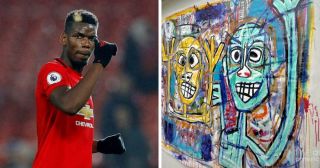 Mino Raiola apparently considers Paul Pogba to be a work of art after comparing the Frenchman to a painting by renowned American artist Jean-Michel Basquiat.

Speaking to Belgian site Sport Voetbal Magazine, the Dutchman said: “Pogba is like a Basquiat painting. Jean-Michel Basquiat was an expressive artist, a little rebellious, just like Paul.”

Did you ever hear so much crap?

He’s probably right about Pogba being rebellious, though I’m not sure that comes across well at this moment in time.

Pogba has played very little football this season due to injuries. That hasn’t stopped Raiola talking in the media and suggesting a move could happen if United don’t meet their objectives.

Of course, that’s important to every professional footballer. Pogba doesn’t care about the shirt as much as we do, the fans, and that expectation has gone completely out the window with fans falling out of love for a player who should be their main man.

Juventus defender Matthijs de Ligt, another one of the 52-year-old’s clients, reminds him of Rembrant: “As for De Ligt, he is like Rembrandt and is proving that with his latest performances.

“He is becoming The Night Watch before my very eyes. I heard reports he was struggling with Juventus, but I seen Matthijs only growing. It’s his first time at a foreign club.”

Anyway, this is all rubbish talk. We want to know when Pogba will be back fit or if he’ll ever play for United again?