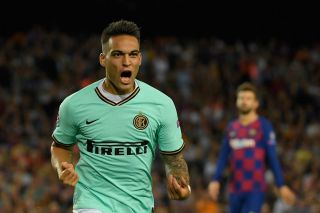 According to The Times, Manchester United have ruled out a move for Lautaro Martinez after they balked at Inter Milan’s £94m asking price for the young Argentina striker.

Man Utd are searching for a long-term option up front after realising the obvious mistake they made by not replacing Romelu Lukaku when he joined Inter Milan last year.

Then we lost out on Erling Haaland in January after the Norwegian completed his move to Borussia Dortmund, which led to United making an emergency loan deal on deadline day after Marcus Rashford was ruled out for a long period with a serious back injury.

I think Ighalo will offer United something different and score some goals between now and the end of the season, but there’s a reason he only came in on a six-month deal. There’s also a reason for United being so disorganised with this apparent squad rebuild.

The Times report came after the Daily Star ran a story on Martinez being set to snub United and Man City this summer to join Barcelona instead.

It seems like a lot of money to be demanding for Martinez but United are going to need to overspend this summer. The board have so much work to do in order to make the team look appealing to the big stars again, who don’t just want to come for a payday.

Selling Lukaku and not buying a goalscorer before the start of the season was a huge mistake. Who are we holding responsible?