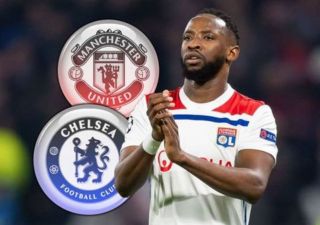 Chelsea will go head-to-head with Manchester United for the signing of Lyon striker Moussa Dembele, according to the Mirror.

The report claims that Roman Abramovic is willing to back Frank Lampard in the summer transfer market after failing to land any signings in January — when their transfer ban was lifted.

It adds that Lyon value the French striker in excess of £60m, which isn’t a surprise considering the 23-year-old’s form in recent years.

Dembele has scored 38 goals and provided 12 assists in 79 appearances for Lyon since leaving Celtic.

This season he has 18 goals and six assists from 33 games across all competitions, and he is clearly keen to establish himself in France’s national team in the future. A big move would enhance his chances.

Lampard has called upon youth in his first season as Chelsea manager. He hasn’t had a proper chance of making the squad his own yet and will be hoping Abramovic gives him the necessary time to do so.

Also noted in the report is that United are long-term admirers of Dembele.

This could spark a battle between the Premier League clubs in the transfer market.

Since Ole Gunnar Solskjaer became manager Dembele has regularly appeared in the gossip columns as a potential target.

There’s no smoke without fire!