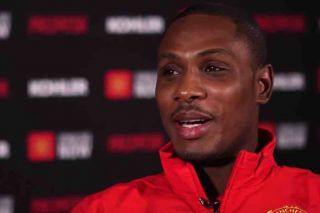 Odion Ighalo did not hesitate in taking a pay cut to complete his dream move to Old Trafford.

As a lifeline Manchester United fan, he couldn’t let the opportunity go.

The Red Devils were already short in attack following the summer departures of Alexis Sanchez and Romelu Lukaku, a serious back injury sustained by Marcus Rashford made a January reinforcement crucial.

Anthony Martial is too inconsistent to lead the line from now until the end of the season because we don’t know when Rashford will return. And, although he’s been brilliant, it’s too early to rely on Mason Greenwood to score goals every week.

United looked at a variety of options and eventually completed a late loan deal for ex-Watford striker Ighalo, who joins until the end of the season from Shanghai Shenhua.

“I’m very happy,” he said (via Off The Ball). “First, I want [to] say thank God for making this happen and it’s just like a dream come true for me.

“People that know me, even back in Nigeria, and even when I was playing at Watford, my team-mates knew that I loved Man United, I support them. When I played against Man U, that emotion is there, because it is my dream.

“It is a nice reality, so I’m very happy and I’m looking forward to start.”

Ighalo followed an ex-teammate of his to United on deadline day. The Nigerian striker spent a brief period with Bruno Fernandes at Serie A side Udinese, and called his move to Old Trafford “very dramatic” having been informed by his agent the day before of United’s interest.

“From 11pm there was paperwork, negotiating and all that, for the loan deal and all that, so we were talking and other teams are calling them, wanting me,” he told MUTV.

“But I told my agent that this is what I want. I want to come here.