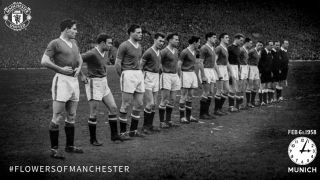 On this day in 1958, 23 people lost their lives in the tragic Munich air disaster.

Eight of Matt Busby’s ‘Babes’ were killed, including greats Duncan Edwards and Tommy Taylor, in a disaster that shocked the sporting world.

United had been to Yugoslavia to play in a European Cup game against Red Star Belgrade and set off back home the following day.

The aircraft stopped in Munich to refuel and then there were two aborted takeoffs due to engine problems.

By the time the third take-off attempt happened, the runway was covered in slush due to snowfall and the aeroplane crashed through a fence at the end of the runway and into the house.

The Munich air disaster is the darkest day in Manchester United’s history and it’s important that the legacy of the Busby Babes lives on.

They will never be forgotten.

There’s not a day goes by that I take this shirt for granted. The Flowers of Manchester ❤️ pic.twitter.com/cL6idk1tgm

The #FlowersOfManchester. Forever a part of our history.