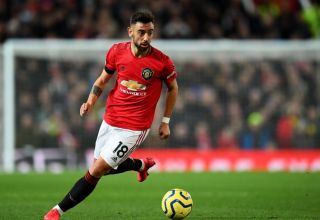 Former Novara sporting director Cristiano Giaretta has recalled how quickly Bruno Fernandes leant Italian and shaped his career following a move to the Serie B in 2012.

Giaretta previously held directorial roles at Udinese and Ascoli and played a key role in bringing Fernandes to Italy during his time at Novara. He now works as sporting director at CSKA Sofia.

In an interview with The Athletic (picked up by Tribuna), Giaretta spoke about the midfielder: “He impressed me with his technique. He was really good in one-on-one situations. His decision-making was also excellent.

“The only thing that didn’t convince me at the time was his physique. He’s not exactly a wardrobe today, of course, but back then he was very, very light. But he showed more character than other people of his age. He had personality on the ball: he always wanted it.

“Everything flowed through him. Bruno likes to get in behind, with or without the ball. This is a good quality. He also shoots well from long distance, like Rui Costa did. They’re very similar in style.”

This isn’t the first time we’ve heard about Fernandes showing good character. His arrival at Old Trafford has been met with the label ‘leader’ from his two-and-a-half-years at Sporting Lisbon.

Giaretta has also recalled that it took Fernandes less than a month to learn Italian. The playmaker used Post-it Notes to help him familiarise himself with the language.

“They were everywhere. ‘Tavolo’ on the table, ‘sedia’ on the chair, ‘frigo’ on the fridge… it was really smart. After one month, he could already speak Italian. His attitude was superb. Even at 17, he had such a strong character.”

That shows that Fernandes was keen to settle in as quick as possible, which can only help a player joining a new league in a different country.

The Portugal international already knows what it’s like to play abroad and that bodes well for his chances to become a Premier League star.

He made his debut at the weekend against Wolves. The game ended in a scoreless draw but the new boy played well.