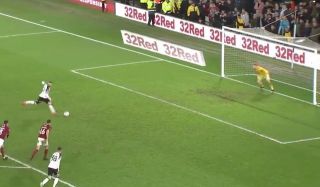 Manchester United will face a Derby County side featuring Wayne Rooney in the FA Cup fifth round after the Rams beat Northampton Town in their replay on Tuesday.

United didn’t need a replay to beat Tranmere to reach the FA Cup fifth round, and were drawn away to Derby or Northampton, who drew their original tie 0-0 at Sixfields. We hoped for Derby after the draw was made simply because Rooney joined them as a player/coach not too long ago.

Rooney captained Derby last night and got himself on the scoresheet with a 77th minute penalty, with the Rams winning 4-2 at full-time.

Wayne Rooney back scoring in the #EmiratesFACup 😍 pic.twitter.com/MfmmGj9Mmw

Derby will now host the Red Devils in the week commencing March 2.

Rooney will face his former club for only the third time since leaving Old Trafford in 2017.

There have been times this season when we could have done with still having Wazza around.