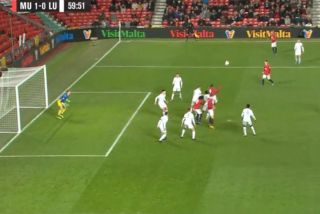 Manchester United Under-18s are leading by a goal in their FA Youth Cup tie against rivals Leeds.

It’s a big turnout at Old Trafford tonight for a youth match, with Leeds fans loudly mocking United’s ongoing situation with Ed Woodward, lauding the executive vice-chairman as some sort of hero.

But United look set to have the last laugh thanks to Dillon Hoogewerf.

The Dutch youngster scored with a powerful header directed beautiful past the Leeds goalkeeper.

Watch the goal below (footage courtesy of MUTV):

Hoogewerf is short in stature, but the striker has big potential as he’s shown tonight.

He joined fro Ajax in the summer.

Leeds are not only a goal down, but down to 10-men after having a player sent off for a second yellow card.