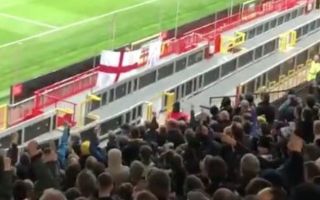 Making the most of their time in a Premier League ground, the sheep are making a racket while the Under-18s face off.

Taking the mick, as rivals do to one another, Leeds fans are singing about Man Utd’s incompetent executive vice-chairman Ed Woodward.

Woodward is responsible for most of the bad decisions made at United since taking over David Gill’s role at the club.

Three managers have been sacked under his reign, and the fourth is struggling without significant process made in the squad rebuild this team desperately needs.

This is good news for Championship side Leeds United, who dream of promotion every year.

Maybe next season they’ll get more days out at Old Trafford. Hopefully not.