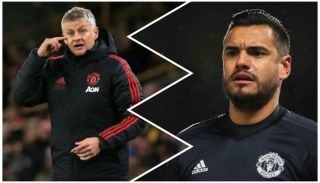 Manchester United run the possibility that both Sergio Romero and Lee Grant could leave in the summer, and reports claim the club have begun to compile a list of replacements.

The news comes after the signing of Nathan Bishop from Southend United on a two-and-a-half-year deal, as confirmed by Man Utd last week.

Both goalkeepers in question have seen little game time over the course of this season and it is unlikely that they will get much more first-team football should they stay at Old Trafford.

READ MORE: Solskjaer explains how Man Utd had to ‘tear house down’ in squad rebuild

Though Romero is the better of the two, he has just over a year left on his contract. The Sun are reporting that he is desperate to get regular action — a difficult objective to achieve at United with David de Gea the definite first choice.

Romero earns around £60,000-a-week and United have the option to extend his deal for another year.

A source told The Sun: “Sergio Romero is happy at United but there is plenty of interest being shown in him. At one stage, he thought he might even have a shot at being No. 1, but that was before David [De Gea] renewed his contract late last year.”

Meanwhile, Grant has only made two first-team appearances since joining from Stoke City in 2018. His contract runs out in the summer but I don’t think any Reds will be losing sleep over that.

The report adds that United have not held any talks with Grant over renewing his current contract.

Dean Henderson should be part of United’s plans for the future.

He’s currently on loan at Sheffield United and already looks like one of the best keepers in the Premier League.

De Gea is certainly looking over his shoulder and United must make a decision at the end of the season when Henderson returns from his season-long loan.