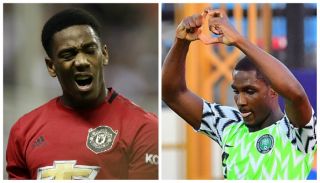 The transfer window is now officially closed and United fans can breathe a huge sigh of relief for the next few months and not have to worry about speculation. Bruno Fernandes finally signed in a lengthy saga worth of any British Soap and United finally got a striker (on loan at least) in Odion Ighalo for the rest of the season to replace the void left by Marcus Rashford’s injury.

Now United’s problem at number 9 has gone back to last year when United let Romelu Lukaku go and did not adequately replace him going forward. Anthony Martial and Marcus Rashford have both had spells at centre forward but neither have the knowledge of the position to excel on a regular basis, Mason Greenwood has done very well but is a young player learning the game so unfair to put him in this discussion.

Ighalo coming into this team will give United a specialist striker and a physical presence upfront, something they have lacked since Lukaku left. Martial and Rashford are wingers not strikers so they do need someone who understands the subtlety of the role and the demands it entails.

Martial in particular has been very poor upfront for a while now, his performances very often flatter to deceive, and he does not know to play the role. Now I will get a lot of hate for attacking him and Martial FC will mobilise, but he has been poor and the excuse of bad service only last so long.

Martial will drift into his previous position on the wing to receive the ball thus there is no presence in the box when the ball comes in or no penetrative pass can be played into the box as nobody will be on the end of it.

He is often bullied off the ball and his link up play and touch has been poor in the last few weeks, the performances he has had lately were similar to Lukaku’s but his supporters will rush to defend this but I have watched him live numerous times this season and will say next summer in a fully fit squad with a top class striker coming in then he is Rashford’s backup on the left.

This season has proved the striker position he has occupied is not for him and that if he plays LW for the next few months with Ighalo playing in the middle might see him perform better but for me he is not better than Rashford and the club may look at moving him on if they can get what they paid for him back and reinvest although it is a lot harder considering his new contract ,but there will be someone like PSG who would take the gamble if the lost Mbappe or Neymar right? I also understand people will be upset at this thinking there are other players who need to go and yes, they do but this is long-term not short-term.

Over his time here he has had so many excuses made for him in terms of managers, tactics, personnel, etc but unless he can run at defenders with the ball at his feet, he doesn’t cause much trouble to them. His fanbase even suggested that José Mourinho cost him a World Cup medal because he didn’t play him, rewriting of history as I remember someone who just downed tools instead of fighting to force his way back into the team but each to their own.

Rashford has been a revelation this season as he had a bad patch playing as number 9 but then he was unplayable when back at left wing so with a specialist striker I think he could go on to be even better. His improvement year on year has been brilliant despite change of roles and tactics and managers, he has adapted superbly and his loss to injury will hinder any remote chance of a successful season whatever anyone’s definition of that is for United this season.

The club will have to make big decisions on players and a number 9 is an absolute necessity, long-term United need someone who has a presence, can link up play and score the scruffy goals that all managers crave from their strikers.

Ighalo will give United that for a couple of months as if United have identified the player they wish to go for, then it is impossible for them to sign him in January as the club he plays for would not sell so summer move is more likely.

There would be a wealth of targets but a right-winger to compliment the striker plus Rashford would mean United have a balanced front three and more importantly a functional one as of right now it is all over the place so goals and creativity are reliant on breaks or individual moments rather than design.

There is a lot to improve upon in all areas, but this is one that has become more and more obvious over the course of a season and more so after Sanchez and Lukaku’s departures in the summer.

United are struggling to score goals and now Bruno Fernandes is here and with Paul Pogba coming back soon, at least service should not be a problem, but if United can get those players back then creativity and vision would be better. If the number 9 is not resolved long-term you could have a great team behind them would fail if this position is not upgraded.

In my opinion the ideal signing in the summer would be Raul Jimenez from Wolves, he was superb in the game at Old Trafford. Seeing him live was proof that he is a player we should try everything to get, his hold up play and link up with Jota and Traore was brilliant not just in that game but for last couple of seasons. He is a proven goalscorer who offers so much more and is proven in this league and against the best this league has to offer.

For me if United go long-term for a younger player then Moussa Dembele from Lyon would be ideal, the club have been linked with him for a long time now and I think he will continue to be linked for the next few months.

But two wildcard options for me could be Morelos at Rangers and Edouard at Celtic, two players who are young and talented but can be coached into being really talented players. Morelos is a fiery character but if he can be tamed, he is a wonderful player who not only scores domestically but in Europe so in a better team could do some damage.

I think this is a big position that does need to be addressed as we need to find a striker and then make sure we play to their strengths and also have an attack with balance then we can attack successfully and penetrate low blocks that cause us so many problems.