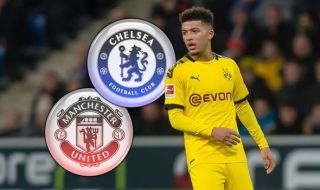 Manchester United are set for a £100m summer transfer battle over Borussia Dortmund star Jason Sancho, according to reports.

The Sun report Man Utd and Chelsea are set to go head-to-head in a bidding war for the player at the end of the season.

And we should be expecting Chelsea to spend big in the summer. They were only permitted to sign players again in January but missed out on a striker. Roman Abramovic is likely to back Frank Lampard in the market come that point.

While Sancho looks an incredible talent, and probably one of the hottest properties in Europe at the moment, is he ready to return to the Premier League and be an instant star?

The ex-Man City star continues to break records with his free-scoring and impressive stat count. This season he has already scored 12 goals and registered 12 assists.

The report claims Chelsea would have to offload some of their players – such as William — in order to sign Sancho.

Lampard — like Solskjaer — will be keen to invest in the squad in other areas.

It goes without saying that Sancho would improve United. We need a signing on the right flank to build the complete attack, which currently only includes Marcus Rashford from the current squad. A top class striker is also needed in place 0f Anthony Martial.