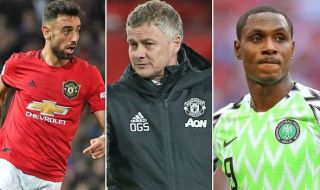 The transfer window January madness is finally over.

A deal has been finalised for Bruno Fernandes and how we have had to wait.

United love a transfer saga don’t they? Last transfer window it was Harry Maguire and this one has featured the Portuguese playmaker.

Manchester United have ‘agreed a fee’ and ‘completed the deal’ for Fernandes every day, it seems, in January.

Speculation has been rife but the only constant in all of this is that two deals are now completed.

It all seems like a token gesture at best from the club. Seemingly, it looks like Sporting Lisbon were dragging their heels wanting a better deal. Who could blame them? United paid a reported £80 million for Harry Maguire and another £50 million for Aaron Wan-Bissaka.

Bruno was Sporting’s talisman and captain, scoring 20 goals and assisted 13 times in 33 games in the league last season. They are hardly going to let him go cheap and the onus has been on United to convince them to sell.

Sporting Lisbon needed the money and eventually the Reds were willing to pay what they always wanted for the beginning.

Also let’s be brutally honest about this, United are in dire need of creativity and quality from midfield. The injuries have caused the club to be reactionary again and exposed the continued lack of planning within.

Would United be buying Fernandes if we hadn’t had so many injuries? Of course not.

It was recently reported that Barcelona were interested but that was an obvious smokescreen to get United moving. United fell for it and here we are.

So that begs the question, have the Reds got a better deal than they would have in the summer? Fernandes signed a new contract in November with Sporting so it is unlikely his fee would have dropped significantly since the August. If United were so keen on the player they have had since that time to negotiate the transfer fee. Alas, the Reds waited until three days before the January transfer deadline to agree a fee. As I said, reactionary rather than any actual forward thinking.

Of course, no signing is going to be a guaranteed success which the club has proved in the recent past.

How is the team going to improve? This current squad has proven its lack of quality and depth. United have backed their selves in to a corner they can only spend their way out of.

What sort of influence would Fernandes had if he was in the squad from the summer? We don’t know the answer to that but he couldn’t have been any worse than the current crop.

It is indeed frustrating times even with the signing of Fernandes as it still exposes the club at the same time. Only when circumstances are at their worst than the club will step in with a transfer.

Wouldn’t it be better if they gave Ole the tools to begin with rather than waiting for a collapse?

It is plain to see that United clearly have not planned anything for this window and as a result were scrambling to get a striker.

Former United youth player, Joshua King was strongly linked deadline day morning but why Bournemouth would sell this late in the window just goes to show how bad things have got.

The rumours flying around involving Danny Ings, Temmu Pukki, Slimani, Giroud were baffling. We have to take some of this speculation with a grain of salt but it is a fact that the club were clumsily looking for a forward. Any forward.

So what has been the solution? Odion Ighalo. A loan deal for a 30-year-old from the Chinese League. If that doesn’t tell you what you need to know about this regime then I don’t know what will.

Of course, the fans will welcome the Nigerian with open arms but to believe all the clubs problems have been solved with these signings would be a mistake.

What has happened to this club? It really is a Shambles.

United have clearly not thought any of this through when the evidence has been right in front of them.

We know Ole wants more but Ed Woodward and Matt Judge just don’t know what they are doing.

The club is in the hands of a man who thinks employing a glorified PR like Neil Ashton is more important than the future of the squad.

Using Ashton’s friends in the media to enhance his reputation amongst the fans.

It is not working and at the moment neither is this ‘new direction.’

Hopefully, Bruno and Ighalo can provide some much-needed positivity but don’t thank Ed, he is more worried about his persona than personnel.

After a tough game on Saturday, United will be able to regroup after a short winter break. Let’s hope the team is reinvigorated and ready to challenge for a top four place. Chelsea have opened the door a little bit with poor form and have failed to strengthen this window.

The Reds have been given chance after chance to catch Lampard’s men but failed to take advantage. United have already beat Chelsea twice this season and visit Stamford Bridge shortly after the break.

It could be a defining game in Ole’s boys season and could shape our summer recruitment. If this January window is anything to go by then it could be another long drawn out disappointing window.