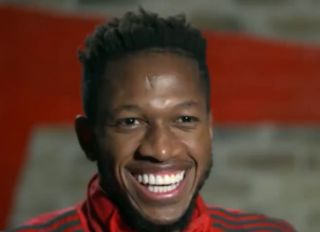 Fred has revealed why he is known as ‘Pastor Fred’ amongst his team-mates at Old Trafford.

“I like to talk about my religion on social media. I’m someone who is very grateful to God for everything he’s done for me.

“I always show this gratitude on social media, everyone sees it and I’ve been given this nickname, Pastor Fred. I think it’s cool and long may it continue.”

He joined United in the summer of 2018 but struggled for regular playing time under José Mourinho, who brought him to the club following his exit from Shakhtar Donetsk.

While there were many questions asked of Fred, who at the end of last season was being deemed a flop, the Brazil international has turned things around in the recent absence of midfield duo Scott McTominay and Paul Pogba.

It’s took him time to acclimatise but hopefully Fred continues to grow and has a long future at United.

The squad still needs more quality in midfield — at least two signings even if Paul Pogba stays — and that could see Fred eventually being a squad player.

That’s part of any rebuilding — playing taking reduced roles — but for now he just needs to focus on his game and finish this season as strongly possible.