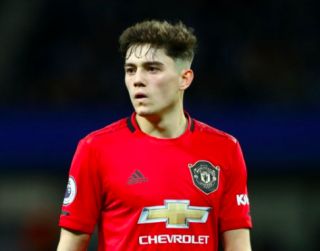 Manchester United winger Daniel James has opened up about the loss of his father in a recent interview with BBC North West.

James’ father Kevan tragically past away last year just as he was securing his move from Swansea to United.

His debut goal against Chelsea on the opening day of the season was memorable as he emotionally dedicated the effort to his late father.

Peter Hill set up a football team in Wigan called Place2Place FC, a side that aims to help vulnerable people who are dealing with grief or other mental health issues.

James visited the team and opened up on his own experiences about losing his father and how speaking out on his issues has helped him.

We can only reiterate the importance of men opening up on their mental health problems and speaking to people to gain help.

See the interview below, courtesy of BBC North West:

Manchester United's Daniel James says talking about the death of his father helped him to get through the grief.
He's now urging other men to be open about their mental health. pic.twitter.com/Df4F2EHpaE