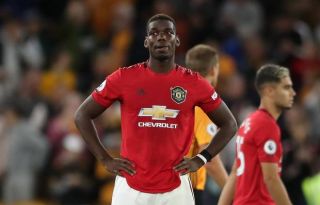 Paul Pogba has reportedly reiterated to Manchester United teammates that he wants to leave the club this summer.

The French midfielder is currently recovering from an ankle operation and has been out for the majority of the season with two separate injuries.

Pogba, 26, has started only 6 times for Ole Gunnar Solskjaer’s side this season.

And, despite the January addition of Bruno Fernandes, Manchester Evening News report that he is still preparing to leave Old Trafford at the end of the season.

The report claims that European giants Juventus and Real Madrid still retain an interest in the World Cup winner.

It is believed that while Pogba remains a popular figure with United players in the dressing room, but there is an understanding amongst the majority of them that it would be in the club’s best interests to let him go this summer.

Pogba has been out since the Boxing Day victory over Newcastle with injury and has not been seen around the United squad. He had previously returned just four days earlier against Watford after a three month lay-off.

It seems clear that Pogba is determined to leave United this summer and Solskjaer should not stand in the player’s way of his exit.

United should still be able to command a high fee for Pogba which should be reinvested in creating a new-look midfield next season.