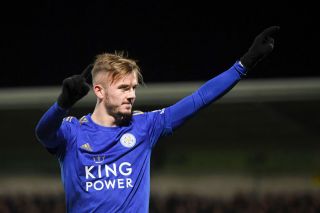 Manchester United’s hopes of signing James Maddison this summer have effectively ended with the playmaker set to sign a new contract at Leicester City.

As reported by John Percy of the Telegraph, Maddison is set to agree on lucrative new terms to remain at the King Power Stadium on a long-term contract.

It is believed Maddison’s contract could be signed over the mid-winter break with Maddison’s representatives in negotiations with the club.

He is expected to get a significant pay-rise on his current £55,000 per-week contract after his impressive form since joining from Norwich in June 2018.

Maddison has scored six goals and contributed three assists from central midfield in Brendan Rodgers’ side’s charge to third place in the Premier League so far this season.

He was seen as an ideal creative option for Manchester United in this summer’s window.

The report suggested there was an optimism a the club that Maddison could be brought to Old Trafford, but that now appears unlikely in the near future.