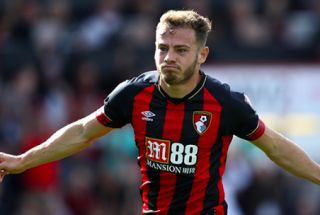 Manchester United’s interest in Bournemouth forward Joshua King was well documented in the closing stages in the January transfer window.

Ole Gunnar Solskjaer was desperately scrambling around for attacking options to bolster his squad in the final hours and the 28-year-old former United youngster was considered.

As reported by Manchester Evening News, the Reds made an offer for King but the Cherries rejected the club’s advances.

It is claimed United were not willing to pay the asking price demanded by Bournemouth for one of their most important players.

But, according to reports, King was not the only player from Eddie Howe’s side that Solskjaer was keen on bringing to Old Trafford last month.

Duncan Castles of the Daily Record says United were one of several Premier League clubs interested in winger Ryan Fraser.

The report says United made an enquiry for the Scotland international, worth around £15m.

While Fraser is a talented wide man, Solskjaer needed a goalscoring striker to bolster his attack bereft of natural goalscorers.