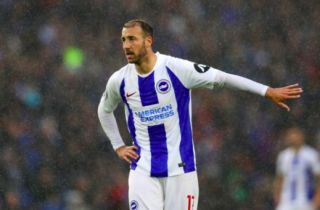 We are all aware that Manchester United’s striker search reached desperation as Odion Ighalo made the loan switch until the end of the season on deadline day.

While the United boss could not secure a long-term target that he can build the squad around, a 30-year-old ex-Watford striker came to Old Trafford in a relatively low risk short-term deal.

Rather worryingly, the Daily Mail report that Glenn Murray was among a long list of names United were considering as their search began to get frantic in the final hours.

Brighton veteran Murray is now 36-years-old and has started just one Premier League game since September.

Surely this is not an option the club were seriously considering bringing to Old Trafford?

Regardless, as reported by BBC Sport, Murray signed a new one-year contract extension for Graham Potter’s side with his previous deal set to run out this summer.

Murray has scored 111 goals for Brighton in 278 games across two spells at the club.

And the Englishman has responded to his future and the extraordinary links to Manchester United.

“It was a little bit up in the air,” he told Alan Brazil on Talksport, as quoted by Manchester Evening News.

“Obviously I want to play more football and the club appreciated that.

“But they offered me a deal and I’m just glad to extend my stay at the club, and just prolong my career in the game to be honest.”

Murray was then asked if he had an update on the United links : “Not really to be honest.

“I’ve seen the story, but I haven’t heard much about it.

“I just let my agent deal with all that and I just try and concentrate on what I’ve got to do.”