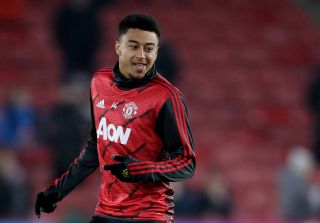 Jesse Lingard is open to leaving Manchester United with Atletico Madrid and Roma interested in signing the England international, according to reports.

The 27-year-old has had an awful season — scoring just two goals and registering one assist in 32 appearances so far — and with the arrival of Bruno Fernandes, United could find themselves in a good position to offload a player who has struggled for a long time.

I’m not going to sit here and slag Lingard off. That won’t achieve anything and it’s actually quite sad to see how his career is turning out.

The standard of performance have dropped significantly and maybe Lingard needs a move abroad, a fresh start.

Lingard’s current contract expires in 2021 while there is an option t0 extend for a further year.

But according to ESPN, Lingard is considering a move away from Old Trafford while both Atletico and Roma sniff around.

The report adds that Ole Gunnar Solskjaer wants Lingard to stay but the player is now considering his options in the wake of the criticism he has received online from United supporters.

A lot of it is below the belt, but we can’t defend him on the pitch and that’s where it really matters.

Fernandes is about to show him a thing or two.