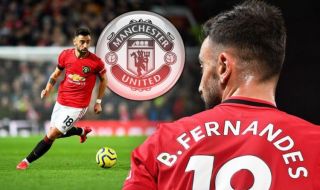 Ed Woodward has been criticised for missing Manchester United’s draw with Wolves at the weekend.

The match marked an introduction to life at Man Utd for Bruno Fernandes, our new signing from Sporting Lisbon, who made his debut on Saturday and did enough to warrant a player in the BBC Sport Premier League team of the week. He was the only United player to make it this week.

However, it seems Woodward wasn’t too bothered about that, with the United executive vice-chairman absent from the game — which has angered Gareth Crooks.

Writing in his BBC Sport column, the pundit who included Fernandes in his TOTW hit out at Woodward for not being there to see United’s new signing. He questions what could have been more important for him to miss the game?

“What a pity executive vice-chairman Ed Woodward wasn’t there to see his new signing make his league debut,” Crooks wrote.

“I can’t see what can be possibly more important than seeing your £47m purchase come through his first major test for his new club — can you?”

Woodward attended the Manchester derby last week at the Etihad after United fans showed up outside his house in protest. He probably feels safer there than he does at Old Trafford.

Crooks didn’t leave it there. He went on to criticise the club’s transfer activity, with the signing of Odion Ighalo not as promising an addition as that of Fernandes.

He added: “Who sells Romelu Lukaku and replaces him (if only in the short term) with Odion Ighalo? Manchester United it would appear. Ole Gunnar Solskjaer sold the Belgium international to Inter Milan and now finds himself in the middle of a striker crisis having lost Marcus Rashford, his most valued goalscorer, to a rather unfortunate but avoidable back injury.

“Ighalo is a proven striker made very much in Solskjaer’s image. Professional, a team player and most importantly just happy to be at the club of his dreams. But the Nigerian is not in Lukaku’s class, even if he is only on loan.

“This latest signing comes at a time when United fans have become increasingly frustrated by their team’s lack of impact on the Premier League title race. They are playing second fiddle to their noisy but very successful neighbours City and having their noses rubbed in it by arch enemy Liverpool, who are running away with the title. It just doesn’t get any worse than that.”

Hindsight is a great thing but Solskjaer should have seen this coming when he started the season without a recognised striker.

Then again, even if he flagged the issue we don’t think Woodward would have done anything about it. Penny pinching to the core.