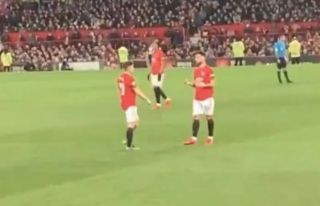 Bruno Fernandes could not help Manchester United to a victory in his first game for the club against Wolves on Saturday, though he did have some efforts on goal.

Still, the Portugal international had an impressive debut and made BBC Sport’s Premier League team of the week, which isn’t a bad feat for his first week in English football.

Fernandes showed that he is already a much-needed confident and vocal figure in this side as he was spotted giving tactical advice to Daniel James.

As an experienced international, Fernandes could be an important addition to the younger players in the squad, also including Aaron Wan-Bissaka, Brandon Williams and Mason Greenwood.

Watch the video below as fans notice Fernandes making an effort to help James on his running and positioning during the game.

Bruno Fernandes is an alpha midfielder as he brings everyone onto his wavelength and works at his own pace. Here, he is guiding James to make forward runs and he did likewise with AWB. In the first half he was guiding our press, too.pic.twitter.com/a4vWJfW1cN

United fans will want to see more of this as well as goals and assists from Fernandes, and he has it in his locker.

Good initial signs of a leader.